The following blog was written by Leah Kelly. Leah was the South West Peak Working for Waders PhD Researcher at the University of Sheffield Department of Animal and Plant Sciences and worked with our partners at the RSPB. This article discusses the "Behind-the-Scenes" work that went into her academic paper published in the journal Animal Conservation, in 2021.

You can view the full paper by clicking here.

Wading birds like Eurasian curlew Numenius arquata, northern lapwing Vanellus vanellus, and common snipe Gallingo gallinago are much-loved farmland birds in the South West Peak. Sadly, many waders are threatened. In the UK, curlew and lapwing are Red-listed and have declined by 13% and 33% (2008-2018), and snipe are Amber-listed and have declined by 9% (2008-2018) (Harris et al. 2020). Such species select farmed upland grasslands to breed in and can thankfully be found in the South West Peak throughout the breeding season (March-July), despite wader population declines occurring here too. Rush pasture is a particular favourite, especially for curlew and snipe, but considerable expansion of rush Juncus species (native plants that form tall, dense tussocks) in recent decades (Ashby et al. 2020) is a potential contributor to declines in upland wader populations. Although waders benefit from a certain degree of rush cover, swathes of dense rush limit access to the soil surface for foraging and can deter some species like lapwing from nesting. But it is not only the birds that this can cause a problem for; grassland productivity is reduced for farmers because modern sheep and cattle breeds find rush unpalatable. To tackle this issue, landowners, farmers, and nature reserve managers implement rush management which aims to reduce the extent of tall, dense rush. This management is available within agri-environment schemes (AES) and typically involves cutting a proportion of the rush within a field annually on rotation (leaving uncut areas provides crucial cover for waders) and grazing the aftermath with livestock, ideally cattle. Previous research suggests that such management can improve foraging for waders and increase wader numbers (Holton and Allcorn, 2006; Robson and Allcorn, 2006), but the effects on breeding success are unknown. This is critically important as wader declines are caused by low breeding productivity, principally through predation of nests and chicks (Roodbergen et al. 2012). It is possible that rush management might be associated with predation because resultant shorter, sparser vegetation could reduce the concealment of nests from predators, and that is where my PhD research comes in. 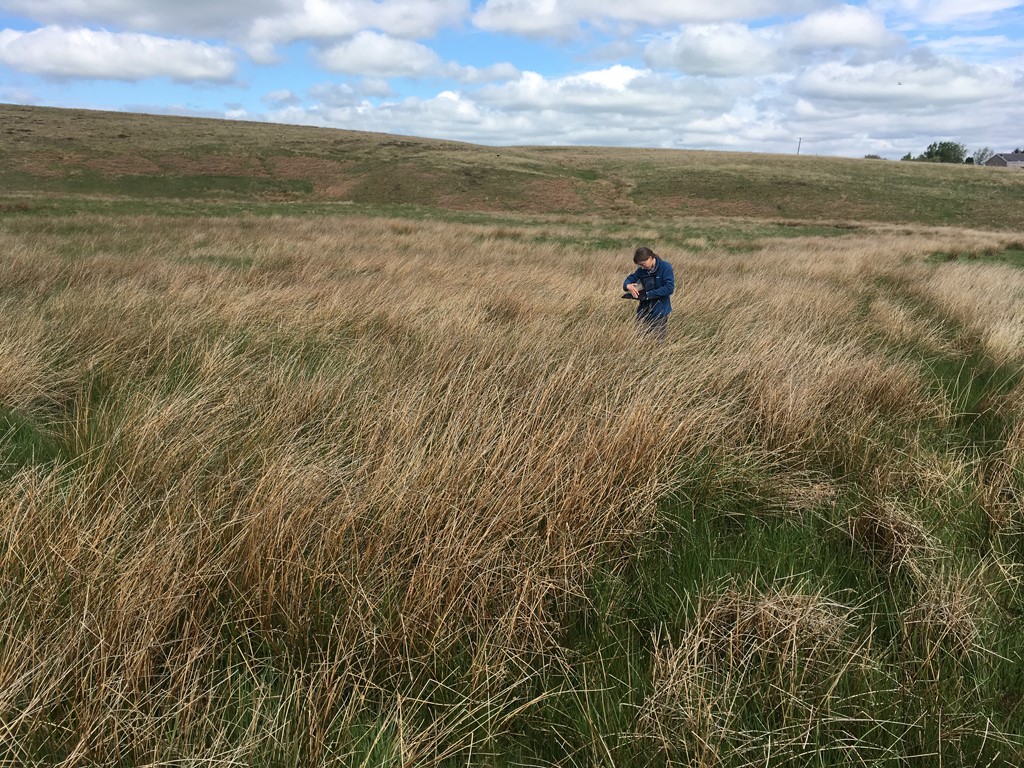 Leah monitoring an artificial wader nest in an area of uncut rush within a field without rush management. Photo credit: Mike Shurmer.

To find out whether rush management influences predation of wader nests, we needed to head out on to farms in the South West Peak and Cumbria (a heartfelt thank you to all the farmers and landowners involved - I could not have done the research otherwise!) and study breeding waders. But, finding and monitoring a large number of wader nests is a tricky business, particularly for a lone PhD student. This is made even more difficult when you need the birds to nest in your pre-selected study fields (I have come to realise that birds never cooperate with your research ideas). To combat this problem, we used artificial wader nests to assess predation rates in fields with and without rush management. 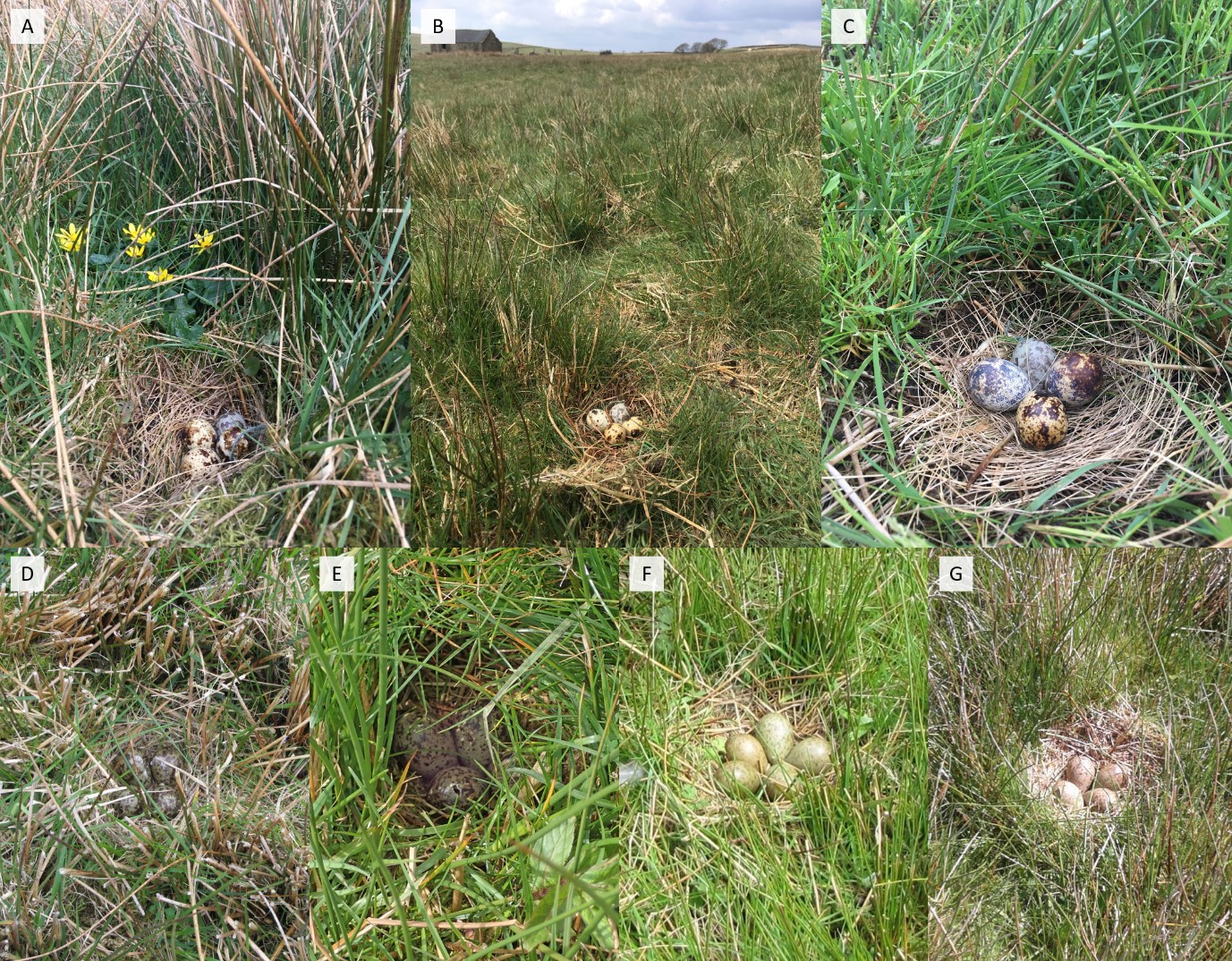 Preparations for this field season were quite unusual to say the least. I did not expect when I started my PhD researching birds that it would involve arts and crafts. Each of my 184 artificial wader nests contained three real Japanese quail Coturnix japonica eggs which mimic real wader eggs in size (similar to snipe eggs), shape, and markings. But how did we find out what predated the eggs? In addition to the quail eggs, each nest included one plasticine egg – that is 184 realistic plasticine eggs that needed to be made! To speed up the process, I used a batch production approach based on a method by Martin, Dueser, and Moncrief (2010):

The idea behind the plasticine eggs is that predators will leave teeth and bill marks in the plasticine depending on whether they are mammals (e.g. foxes) or birds (e.g. crows), enabling us to act out CSI: South West Peak. I visited the study fields frequently, checking my nests every 5 days for a maximum of 15 days… or until predated.

The production of plasticine eggs based on the Martin, Dueser, and Moncrief (2010) method to mimic the real Japanese quail Coturnix japonica eggs in size and shape. Moulds of quail eggs were formed by pressing hard-boiled quail eggs into plaster of Paris until half of the egg was submerged (A), and then covering the eggs with more plaster of Paris (B). Once dry, the two halves (separated by a layer of petroleum jelly) were prised apart creating half-quail egg moulds (C). The half-quail egg moulds were filled with softened plasticine, a length of twine was placed in one half, and then two half-plasticine eggs were joined together to form a whole plasticine egg (D – left egg is a quail egg; right egg is a plasticine egg). To mimic the colour and pattern of the real quail eggs and to minimise the plasticine scent, the plasticine eggs were spray-coated in a layer of tan-coloured PlastiDip® (PlastiDip UK Ltd, Hampshire, England) with speckles and spots applied with brown-coloured PlastiDip® (Purger et al. 2012) (E).

Daily nest predation rates (DPRs) were two times higher in fields with cut rush than in fields without rush management due to the shorter, less dense vegetation making nests more visible to predators. But which predators were snacking on the artificial nests? Marked plasticine eggs retrieved from 45 out of 103 predated nests revealed that most eggs were predated by mammals, similar to real wader nests (Macdonald and Bolton, 2008). These findings are most applicable to species that nest across a range of sward structures (e.g. curlew and snipe) rather than species which nest exclusively in short vegetation (e.g. lapwing). Higher DPRs in fields with rush management highlight the need to evaluate how AES prescriptions that alter vegetation structure impact not only foraging habitat quality but also breeding success.

Our results, however, are not black-and-white. Rush management is still an integral part of the conservation toolkit for waders, despite its potential to influence nest predation, as it helps to restore and maintain habitats which are otherwise at risk of becoming unsuitable. Yet, if we are to successfully conserve our precious wader populations, the effectiveness of rush management for upland waders requires further evaluation.

Our research acts as a springboard for improving our knowledge of rush management, with more evidence required to build on the results of our study. Firstly, a bigger team than little old me needs to monitor the responses of real wader nests to rush management to see whether ecological traps are inadvertently created by altering the vegetation structure. Secondly, we need to identify the optimum spatial configuration and amount of rush for different wader species. Recognising species-specific habitat requirements concerning rush cover will enable appropriate tailoring of AES prescriptions. In the meantime, we must work collaboratively beyond the scale of individual farms to provide a mosaic of different sward structures across the landscape, with short vegetation suitable for foraging, and a range of vegetation structures for different wader species to nest and rear chicks. For this to be successful, however, other components of the conservation toolkit for waders need to be implemented alongside rush management – for example, provision of wet features for foraging, and predator control.

For more information about this research, you can find the full Open Access article here: https://doi.org/10.1111/acv.12672.

A final thank you to the whole South West Peak Landscape Partnership team for your continued advice and support! 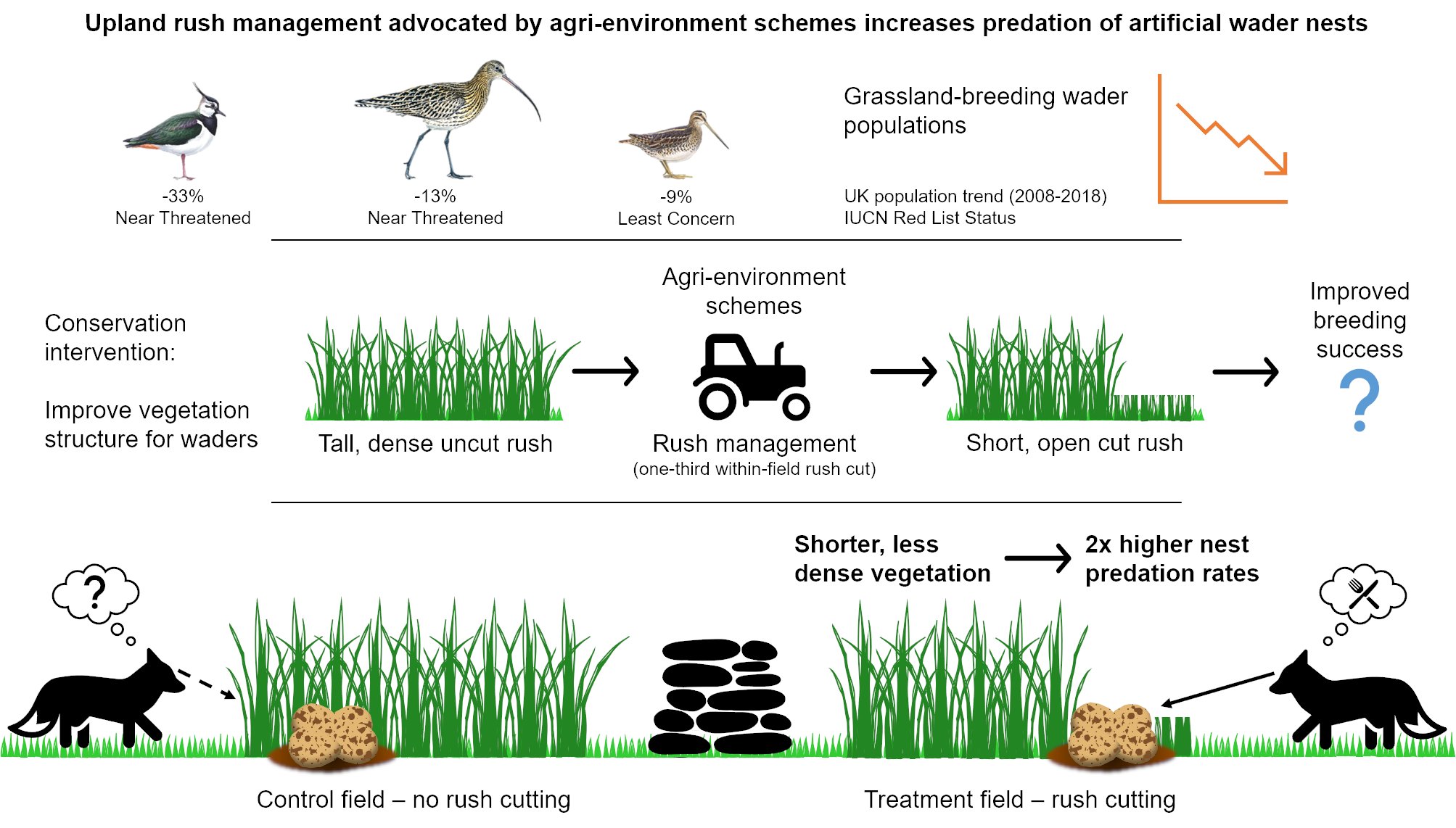 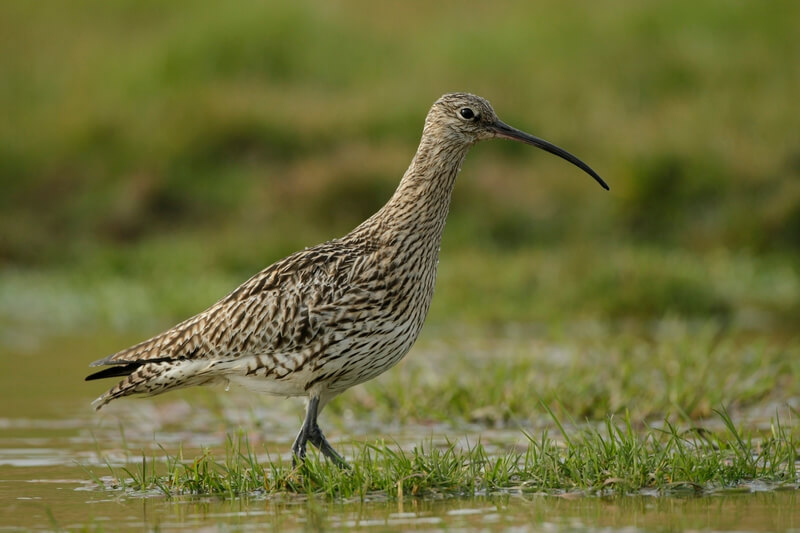