This is an archived website, available until June 2027. We hope it will inspire people to continue to care for and protect the South West Peak area and other landscapes. Although the South West Peak Landscape Partnership ended in June 2022, the area is within the Peak District National Park. Enquiries can be made to customer.service@peakdistrict.gov.uk

This work was made possible with funding from the South West Peak Landscape Partnership, supported by National Lottery players through the National Lottery Heritage Fund, and the Esmée Fairbairn Foundation.

The analysis was of environmental DNA (eDNA) extracted from soil cores collected from 116 quadrats (900m2 area) at 25 sites across the South West Peak area  (Staffordshire, Cheshire, Derbyshire) of the Peak District National Park,
during autumn 2021.

eDNA metabarcoding via high-throughput sequencing was used to examine fungal populations present in each quadrat, with particular focus on macrofungi of conservation concern, that is waxcaps and allied groups, often collectively referred to as CHEGD fungi.

Many members of this group of fungi face the risk of global extinction. A total of 137 CHEGD species were detected, with 74 or more species found at the best five sites (seven sites had 20 or more waxcap species).

Of the 137 named CHEGD fungi detected, 19 have hitherto been found in Europe but not the UK, and 6 only outside Europe. Four potential species new to science were detected.

Based on comparison of the eDNA and data from past fruitbody surveys, most of the 25 sites have high conservation value for grassland fungi with the best meriting consideration for SSSI designation.

Four of these sites were being considered for woodland creation but all were home to 49+ CHEGD species (including 12-21 waxcaps and 7-12 Global Red List species).

Specifically the four sites at risk of afforestation all merit protection of their grassland fungi, with even the least species-rich of these (Gag Aye) having 12 CHEGD species classified as VU (vulnerable) on the IUCN global Red List. 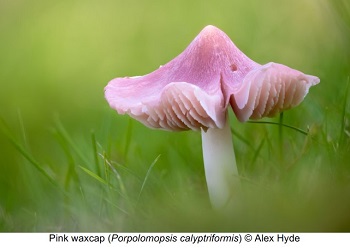