The future of an historic limekiln in the South West Peak is looking bright thanks to High Peak District Scouts showing their support for local cultural heritage by adopting the conserved feature.

To mark the occasion, an adoption ceremony was held by the South West Peak Landscape Partnership (SWPLP) for the High Peak District Scouts at the historic limekiln in Gradbach, Quarnford. An information panel was also unveiled.

High Peak District Scouts group is made up of eight groups: four in Buxton, and one in Chapel en le Frith, Chinley, Hayfield and Whaley Bridge. The limekiln is located close to the High Peak group’s Gradbach Scout Camp.

The limekiln had been in a poor state of repair until last summer (2021) when SWPLP volunteers consolidated the structure in a month-long rescue project made possible by funding from the Association for Industrial Archaeology (AIA), and grants from the National Lottery Heritage Fund through the SWPLP’s Small Heritage Adoption project and the Peak District National Park Authority (PDNPA). The scouts saw the conservation activity and became interested.

Catherine Parker Heath, SWPLP cultural heritage officer, explained: “The adoption is an agreement between High Peak District Scouts and the site owner that states that the group will monitor and, if appropriate, maintain it in good repair. For example, the Scouts will ensure that any new potentially damaging vegetation such as bracken is removed, whilst leaving mosses and lichen to grow. We are delighted that High Peak District Scouts will help protect Gradbach limekiln into the future.”

Paul Read, of Gradbach Scout Camp, said: “The scouts have been part of the local community in Gradbach for the past 68 years. It is nice to put something back and the adoption matches our aims of community service and involvement.”

Paul Taylor, Scout Leader of 3rd Buxton Scouts (Harpur Hill), said: “We have been looking at limekilns around Buxton so the Gradbach limekiln extends our knowledge and area of interest. Taking part in activities to look after the site will help the scouts gain the Derbyshire Archaeology Badge.”

Morgause Lomas, archaeology graduate and creator of the Derbyshire Archaeology Badge, said: “A huge thank you goes to Catherine and the SWPLP team for revitalising an amazing archaeological site right next to the Scout Camp that’s accessible for all Derbyshire Scouts.”

Richard Knisely Marpole, SWPLP volunteer, said: “This has been a really interesting conservation project, bringing something back that was hard to see and unknown even to locals and regular visitors to the area, but now it is a celebrated piece of the past.”

Limekilns are significant heritage assets. There are two basic types in the Peak District National Park: commercial or sale kilns and field kilns. The Gradbach limekiln is a field kiln, these were generally used by farmers for making lime to change the moorland heath vegetation to grassland as new fields were enclosed for agriculture from the 1600s to the 20th century. Lime was spread on the land to reduce the acidity of the soils to allow grass to grow.

Lime from this kiln would have been used for agricultural purposes, and it is likely that it would also have been used in mortars, plasters and limewash in local buildings, sometimes being mixed with ochre from nearby ochre beds, leading to the characteristic colour of farm buildings in the area.

It is thought that the kiln was built by the Harpur Crewe Estate, who had their family seat at Calke Abbey, in Derbyshire. It is the only example of a limekiln in the Gradbach valley and, as such, is likely to have served a number of Harpur Crewe farms in the area.

There are many cultural heritage assets in the South West Peak, which are not Scheduled Monuments or listed buildings. Adopting these ‘undesignated’ assets means they get attention they otherwise might not receive.

Some 40 cultural heritage assets have been adopted as part of the South West Peak Landscape Partnership’s Small Heritage Adoption project, including milestones and a sundial.

If people are interested in adopting other historic features in the South West Peak, they should contact Catherine.ParkerHeath@peakdistrict.gov.uk to find out if this would be possible. Adoptions need the permission of the owner or landowner. 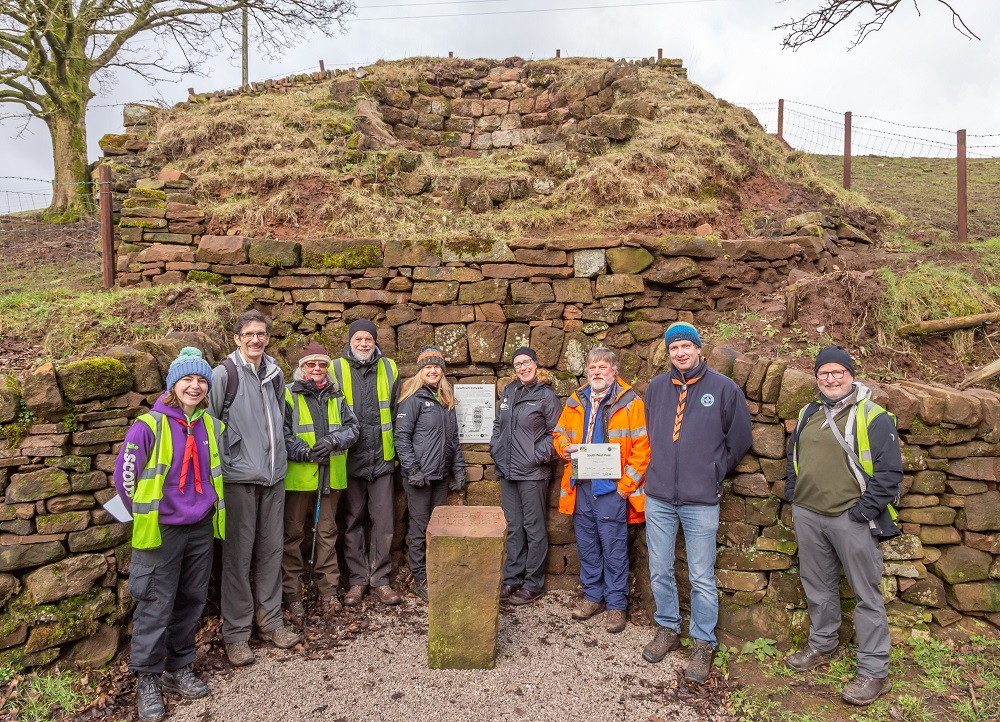