Tarmac is helping to improve ‘access for all’ at a Peak District National Park beauty spot, with a major donation announced today, during National Parks Week.  Visitors to Fernilee Reservoir in the Goyt Valley can look forward to better access and facilities, thanks to the support which is being gifted through the company’s national Landfill Communities Fund.

The Tarmac national donation of over £27,000 will give the route along the eastern shore of the Reservoir a new lease of life by contributing towards the costs for improving the path and adding in seating areas.  It will help provide better access for those with limited mobility, including wheelchair users and families with pushchairs, and will join one of many locations being promoted as ‘Miles without Stiles’ routes by the Peak District National Park Authority.

Tarmac Tunstead Cement Plant Manager Chris Bradbury visited the site to find out more about the plans (part of the South West Peak Landscape Partnership’s ‘Better Outside’ project).  He met with the other project partners – United Utilities (who own and manage the reservoir) and some of the Landscape Partnership team.

He said: “It was a real pleasure to visit this site, one of the Peak District National Park’s numerous sites for walking at the same time as taking in a stunning view.  The Fernilee Reservoir track is a wonderful waterside route with peaceful views out over the water, but it needs a new lease of life.  It was good to see how this Landfill Communities Fund grant will make a substantial difference to improving this track, so it is more accessible.”

Karen Shelley-Jones from the South West Peak Landscape Partnership (which is managing the project) added: “We are thrilled to have been awarded this grant which will support the work of our partnership (which is largely funded by £2.4m of National Lottery Funding).  It is important that there are routes which are suitable for people who have disabilities and mobility problems, so nobody is prevented from enjoying the best that the Peak District National Park has to offer.  We look forward to involving both our apprentice team and volunteers in helping to enhance this lovely route.”

Accessible Derbyshire co-founder Gillian Scotford said: “Sometimes it can be difficult to access the countryside due to poor surfacing and other barriers. These improvements will allow everyone to benefit from being outside and the chance to escape from the pressures of everyday life. I have found the Peak District National Park to be a haven of tranquillity when caring for two sons with disabilities.”

This Goyt Valley site offers many interesting aspects whether you are into walking, finding out more about the local wildlife, or delving into the fascinating history of the area. Where the reservoir is now located there was once a gunpowder mill which operated during the 19th century, a major employer in the valley, it served the mines and quarries in the area.

Chris Bradbury adds: “Whilst this support has come from a national Tarmac fund, we will be promoting the project to all our local employees at Tunstead, Ballidon and Hindlow, and encouraging them to make the most of the new improved site.  We look forward to hearing how many more people are enjoying the Fernilee Reservoir route in the future.” 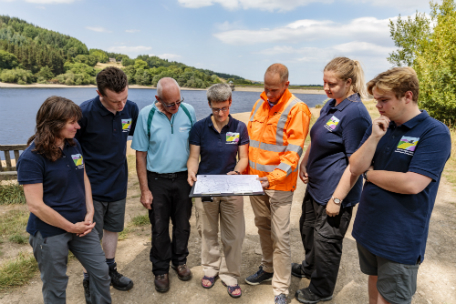