Experts are appealing for the public’s help to understand an old inscription on a recently restored sundial in the Peak District National Park village of Butterton.

The discovery of the unusual markings were discovered by a craftsman whilst restoring the piece.

Butterton sundial is a late 18th century metal sundial on top of what is likely to be a medieval stone cross shaft, mounted on a later base and pedestal in the churchyard of St Bartholomew’s Church, Butterton.

Having seen better days and missing its gnomon (the sticky-up bit), the sundial was in need of repair.

Churchwarden Maggie Risby, chair of Butterton History Society, researched the sundial’s history, finding reference to it in church accounts of the late 18th century. There was also a single photograph from a wedding in the 1950s, showing the gnomon still in place.

With permission from the Diocese, a sundial restorer was found and set to work. This was Alastair Hunter of Macmillan Hunter Sundials. He had the tricky task of removing the remaining base plate to discover how much of the patination (the material on the metal’s surface that had oxidised with age) he could remove to reveal the original markings. This proved to be a very difficult process as the plate was very thin.

During the work, Alastair made the unexpected discovery that there were Gothic script markings on the underside of the plate. The object may have had a previous life as part of something else.

The South West Peak team and Butterton History Society are now trying to decipher the script. If anyone has any ideas of what the inscription is about or what its original use was, then please contact Catherine.ParkerHeath@peakdistrict.gov.uk 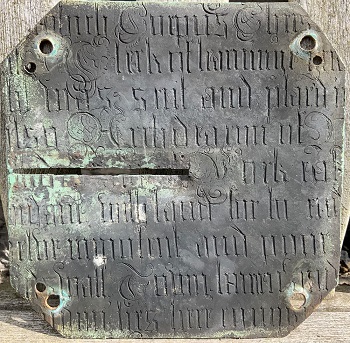